#FordTrends 2014 Recap: The Female Frontier With Jenna Wolfe and More 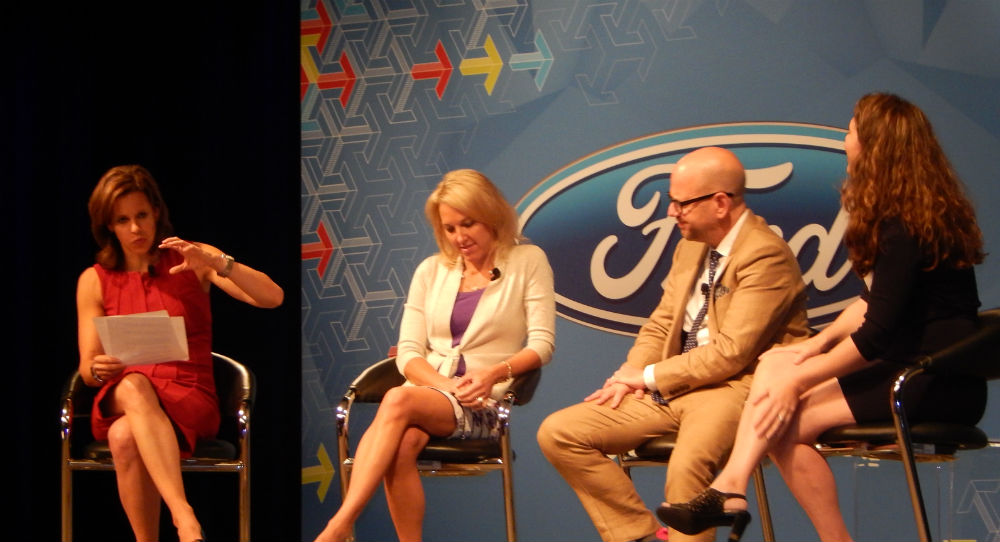 I had the pleasure of attending the Further With Ford Trends conference this year in Detroit. This was my second trip with Ford (I went to the North American International Auto Show in January). The Further With Ford event not only gave us an additional look into what goes into designing and creating Ford’s lineup of vehicles, but we also go to hear about innovation from Clayton Christensen, a Harvard professor, and Kenneth Cole, the famous designer; design from one of the makers of the FitBit; and so many more gifted experts from companies around the world, like IBM and Mastercard.

The first session of the second day of the event was “The Female Frontier” and covered the way that women in the workforce is changing not only our society, but our ideals and economy. Here’s some of the takeaways I learned.

Chantel is the Director of U.S. Marketing at Ford. She just returned from working in China for many years, and Ford allowed her to take a year sabbatical after having her first child (something that is unheard of in almost any industry). Chantel gave us some facts about women in the U.S. versus women in China:

Our households as we know them are also changing. There are now 2 million stay-at-home dads in the U.S., and a recent study reported that 51% of dads would stay at home if they could afford it.

Jenna is a correspondent for NBC’s Today show and is the anchor for Weekend Today. She spoke about her experiences of often being the only woman interviewing athletes before and after games and her experience of coming out on the Today show when she announced she was pregnant with her partner, who also works at NBC.

My favorite quote from Jenna was:

“These women did not wait when people said, “Wait until the time is right,” they just did what they wanted to do.”

Jennifer is an author and writer for New York Magazine. She spoke about our culture shift when it comes to having children and trying to “balance it all” (which is an idiom that men never get asked about). Adults are now having less children: in 1850 there were 5 kids per family, now there are two; the average age is 30.2 to have a child.

Jennifer also spoke about the brattiness of today’s kids (my words, not hers), saying, that there isn’t a problem with the kids. There’s a problem with how we raise kids today. Studies showed that having kids does not make adults happier.

We now have choices

The role of the child has changed dramatically in the last 70 years. Kids, until recently, were considered economic assets. Now, it’s the opposite. They used to work for us, now we work for them. Jennifer also mentioned how easy it is for women to get overwhelmed compared to men.

“When women come home, they don’t see it as a haven. They see it as a shot clock, waiting to get everything done: cooking, childcare, cleaning. Men have less deadline-centered stuff, like yardwork.”

Women also multi-task much more at home; they see it as a video game, ducking and diving.

We are still extremely ambivalent as a culture about women working. It doesn’t matter that more women as sole breadwinners. 60% of US are okay with women outearning men. But 50% of US also said they would be ok/women should stay at home full-time with their kids. There is a big discrepancy here.

We now spend 4 more hours per week with our kids now than in the 1960s, because more women in the 60s cleaned and cooked. Now women focus more on their kids. Think of even the title has changed: housewife (then) versus stay-at-home mom (now).

This culture shift has also changed fatherhood. Men are now spending 2-3x as much time with their kids than their dads spent with them. They are trying to be more like their mom than their dad.

John is the co-author of the Athena Doctrine and he traveled the world learning about the qualities of women that make them such powerful leaders. One of his favorite pearls of wisdom he mentioned (that was my favorite too) was that the President of Israel told him:

“We are in a new world with many old minds. We must adapt ourselves as leaders.”

At the end of the session, Jenna led a panel with the speakers and they answered questions from the room on Twitter. Here are some of their bits of wisdom that stuck with me:

Thanks to all the speakers and to Ford for this great session and event!