The Power Of Social Media During A Natural Disaster 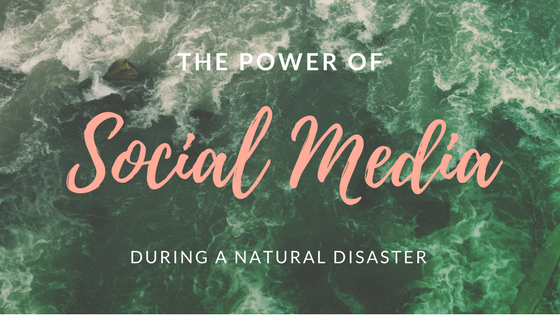 Like the rest of the nation, our hearts broke when we first learned of the disastrous impact of Hurricane Harvey. Hearing about all the losses suffered by thousands of people was devastating, especially when many of us didn’t know how we could help those in need.

As hurricane season is just beginning as evidenced by Hurricane Irma making its way to Florida this month, let’s take a closer look at how social media can positively impact society during one of these disasters.

Facebook, Instagram, Twitter, Snapchat, and other social media sites are great ways for people to share where key survival items are still available. Like in the example of Hurricane Irma, Floridians are sharing where people can still buy supplies like water, canned goods, and diapers. It’s normal for these vital supplies to become scarce in anticipation of a disaster and people have been quick to share details on stores with stock remaining. Many posts are completely devoted to sharing just where these important goods can be found and when new deliveries are expected.

While stocking up on necessary items is an important step to natural disaster preparedness, there are many more steps to consider. As in the case of Hurricane Irma, hurricane preparedness checklists are commonly shared to help people gain awareness. These checklists are key for those who are unaware of all the things they may need to do to prepare. Not only do these checklists advise people on exactly how to prepare, they also educate on general terms like the difference between Hurricane Watch and Hurricane Warning.

Snapchat helped to provide live updates of the destruction people were witnessing as it happened. Images of flooding, property damage, and torrential downpours were commonly seen on the popular app. Snapchat even created a Harvey Snapchat Story that received over 300,000 submissions. Through this app, people could see both what their loved ones and strangers were experiencing.

Get Help For Those In Need

By now, almost everyone has likely seen the viral image of the nursing home residents calmly sitting in their home’s living room. According to the son-in-law of the nursing home’s owner, he shared the image in hopes of getting the ladies some assistance. As nursing homes have many patients with varying degrees of health problems, they have a robust evacuation plan in place for situations like this. However, they had been told to stay and not evacuate before the storm grew more powerful, making the situation dire. Thanks to the tweet, the photo went viral and captured the attention of a news reporter who helped the nursing home get the help they needed.

Check If Loved Ones Are Safe

Facebook created a feature that allows people to mark themselves as safe during a dangerous event in their area. People have used this option during natural disasters, terrorist attacks, and other terrifying events. This is helpful especially during times of panic when cell phones and landlines are down due to damage or overuse.