Here’s What The Experts Are Saying About Live Streaming 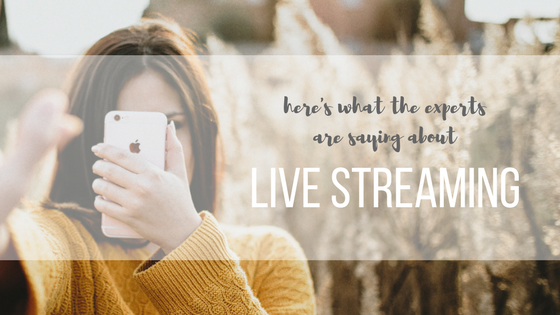 It’s 3pm on a Thursday when all of a sudden, you see a notification from your Instagram app that a friend is live streaming. Even though it’s 2018 now (gasp!), if you’re like many, you may not know what “live streaming” is or why your friend is doing it.

Live streaming is a way for both people and brands to engage in real time with their followers. So what was your friend talking about? The beauty is that you have to watch to find out!

If you’re the type of person who already feels slightly uncomfortable posting a selfie, you may be wondering why anyone would choose to film themselves live. Below you’ll find out what some of marketing’s most plugged-in people have to say about live streaming:

Social Media Streaming Is Taking Off

Amber van Moessner, of LiveStream, a software company known for helping over 10,000 businesses including Spotify.

Live Streaming Is For Everyone

“Live streaming is no longer restricted to sports and entertainment industries. Even retail is making a foray into it with fashion shows, sneak peeks and sale previews.

But the best part about live streaming is it’s so affordable and simple that even small business owners can leverage its benefit.”

–Harsh Agrawal, a blog scientist and CEO of ShoutDreams Media. His blog ShoutMeLoud has more than 832K subscribers and receives 1 million Pageviews per month.

“Live social video also has a benefit that even television lacks: the audience can participate. Viewers watching a live stream on a social media platform can write in their comments. The broadcaster can then read and reply to comments, and allow the audience to influence the content of the live video as it’s being created.

No other social media format delivers these benefits, which is why Facebook, Twitter, and Instagram have already rolled out their live video functions. Each version allows marketers to reach audiences directly in real time, and each differs slightly and in important ways.”

–Joel Comm, a leading live video marketing expert. Pioneering live video online since 2008, Joel’s experience in applications and real-world use of live video are a staple of his Facebook and Twitter Live broadcasts.

Get To Know Your Audience On A New Level

“Authenticity is important in the eyes of the consumer, and there are few ways better suited for connecting with your audience on an intimate level than live streaming. Simply saying “hello” and answering your viewer’s questions and comments can go a long way.

By live streaming, you’ll be able to connect with your audience in real time and build an authentic relationship with them just by having a conversation. “

Still have some burning live streaming questions? Reach out to us at Six Stories and we’d love to help!

Want to learn more about live streaming on social media? Sign up for our 2-hour course today, which is only available for a limited time.