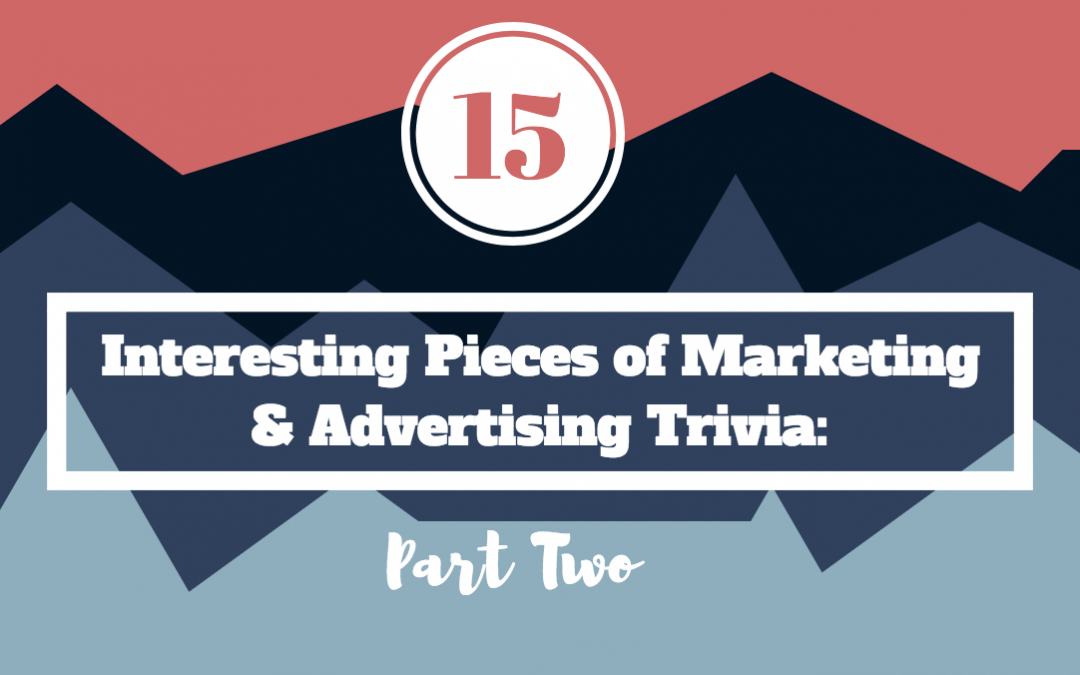 Not a day goes by that we aren’t exposed to some sort of marketing or advertising. Don’t believe us? What does your toothbrush look like? We would be willing to bet it has a design of sorts and likely the brand name…aka marketing/advertising. Not convinced? Try and scroll through your Instagram feed without seeing #ad or #sponsored by one of your favorite celebrities. Still shaking your head? Take a drive. How many flyers, banners, billboards, or signs do you see? Great! Now that we have you convinced, how much do you really know about marketing and advertising?

Why Watches Are Always Happy

Next time you see an advertisement for watches, pay special attention to the watch hands. The majority of watches shown in advertisements are positioned to 10:10 so that the hands of the watch highlight the watch brand name. In addition to highlighting the watch brand, they also make a smiley face! Except for Apple, they set their watches at 10:09.

We’ve all seen that Target toy aisle meltdown, but what causes it? Marketers target kids by showing advertisements for a product while insinuating that the product can improve a child’s popularity. This can cause kids ages 12-17 to nag their parents about buying a certain product up to nine times before their parents succumb to their children.

Mars, the candy company, thought ET from ET: The Extra-Terrestrial was so unattractive that they refused to let ET partner with M&Ms by using M&Ms as a lure. That led to Reese’s Pieces becoming the candy of choice, resulting in a 65% sales increase upon the movie’s premiere. Hershey’s: 1 Mars: 0

How A Goldfish Bests Us

Canadian researchers have found that since 2000, the average person’s attention span has decreased from twelve to eight seconds. This is now lower than a goldfish’s nine-second attention span. The good news? Our ability to multitask has improved!

Say Hello To My Little Face

Want to increase the potential engagement of a social media post? Post it on Thursday. According to experts, the best way to have people interacting with a link days after it’s posted is by posting it towards the end of the week. In fact, food content is 10x more likely to be clicked on on Thursdays and Saturdays. Bon Appetit!

Ever been in a super riveting bathroom stall? Yeah, us neither. But according to research, restroom advertising is a way to cut through all the other marketing clutter to get the consumer’s attention. In fact, it’s a very impactful way to gain attention considering that the recall rate is over 62%, time spent with the advertisement is two minutes on average, and of all viewers surveyed, 98% had either a positive or neutral reaction to the advertisements. Another benefit? Tailoring your advertising to a specific gender.

Show Me, Don’t Tell Me

If you scroll through your Facebook timeline, you likely pass several videos shared by friends. This observation is indicative of changing consumer behavior; specifically, research has shown that consumers are 4 times as likely to watch a video rather than reading text about a product. In fact, programmatic video is estimated to increase up to 50% of online banners and videos by 2019.

Should Have Put A Rock On

Engagement on the horizon for your or a friend? We are willing to bet you’ve heard of “2-3 month’s salary” rule. This “rule” is actually the byproduct of an extremely successful advertising campaign by De Beers diamond cartel. In fact, prior to the 1930s, it wasn’t commonplace to propose with a diamond. So you can thank the creative geniuses behind this advertisement for shaming you into sock-piling your money!

“Casual Fridays” is commonplace now but it was revolutionary when the Hawaiian garment industry first introduced “Aloha Friday” to encourage businesses to allow their employees to wear Hawaiian shirts once a week. This idea later changed to “Casual Fridays” in the contiguous US as a low-budget perk for companies looking to show appreciation to their employees. This change was met with confusion as many professionals were unsure of appropriate dress, opening the door for Dockers to push the now ubiquitous khaki pants.

What’s In A Name?

Big fan of mushrooms? Then the name “portobello” means something to you but it wouldn’t have years ago. Portobello mushrooms are just overgrown mature cremini mushrooms. These fungi got a name makeover to help push the previously unpopular mushrooms.

Amazon And The Alphabet Have Got You Covered

Ever wondered what the Amazon arrow had to do with anything? In addition to looking like a smiley face, the arrow is meant to show the wide variety of products one can find shopping on Amazon. In other words, they’ve got you covered, from A to Z.

If you haven’t seen Groundhog Day, spoiler alert: The main character experiences the same day over and over again. So naturally, marketers have decided to follow suit. If you watch a showing of Groundhog Day, you are likely to see the same identical commercial six times in a row during each ad break.

Fat fingers are a real problem. In fact, it’s the reason why 50% of clicks on banner ads happen at all. Research has shown that this click rate is completely unintentional.

An American laundry detergent company hoped to market their product to Arabs. Their chosen method focused on sequential images showing soiled laundry becoming clean. The company failed to understand that Arabs read right to left, meaning that their advertisement showed clean clothes becoming soiled. We are guessing this had an adverse on their marketing plan.

Any fun facts that we missed? Let us know by reaching out!